Stuck at home with your kids?

Get the printable Family Fun at Home pack and get the inspiration you need to connect with your kids, make memories together, and keep the little ones busy (and happy) for hours! Download it here.

Inside: An awesome birthday surprise idea made my child feel loved and brought him a lot of joy! I’m pretty sure that we will always remember this special birthday!

We were walking to the park when my son suddenly started talking about his birthday. There was still almost one month left until that day but he was already so enthusiastic!

He kept telling me that he hopes to have a big chocolate cake. And a huge balloon with a character on it. And maybe even a small new toy car!

As he was walking next to me talking about his birthday dreams, I realized how much that day meant to him. It wasn’t about the gifts but about feeling special and knowing that he has a day that’s all about him!

So I knew that I wanted to make it really awesome!

This is when the idea of a birthday surprise first came into my mind. But I had no idea what to do!

So I thought about his first 3 birthdays (he turned 4 this year) to look for some inspiration on what would make him happy.

We celebrated his first birthday at home, just with the family and his godparents. And what we loved most about that little party was having dear people next to us.

On his second birthday, we went on a city break to Vienna and it was great! He was just a toddler but he was so happy to spend time with us and to visit nice places together.

Last year, on his third birthday, we organized a party with some kids his age at a small indoor playground. It was a very emotional moment for us because it happened just a few days before moving to California, far away from our friends and family.

What he liked most about that birthday was discovering the playground and playing in a big yellow toy bus. And the cake, of course! 🙂

Looking back at all these birthdays I realized that what really mattered to him were the experiences and not the gifts. He liked being surrounded by love and attention, spending a fun time with us, discovering new things or places. And we loved this too!

So I knew that this year’s birthday had to be an experience that offers him both fun and a lot of love!

I decided to prepare a little surprise vacation for him and to fill it with moments that would make him happy. As one of his favorite trips this year was the visit to Disneyland, I wanted to find something similar.

I looked for some awesome places to visit with kids that weren’t very far from us and one location seemed to be just perfect: San Diego.

I was lucky to find some affordable plane tickets and we booked a 4-day vacation that started exactly on Bogdan’s birthday.

There were 3 places in the San Diego area that I knew he would love: Legoland, Sea World, and Zoo Safari. And I wanted to include them all in our schedule!

So here is what I did.

As the plane was taking off early in the morning on his birthday, I knew that I needed to let him know about the surprise one day before.

So I prepared 4 envelopes with a little note inside each of them. Every note included a message with some clues and a picture to make him curious.

In the evening before his birthday, I asked him if he wants us to start the celebration a little bit earlier. And of course, he happily accepted!

I handed him the 4 envelopes and I let him know that we have prepared something special for him. He was so curious to open them up!

I told him that every envelope includes a surprise and that he can discover one surprise every day for 4 days.

We started that evening with the first envelope. The first surprise was exactly what he told me that he wanted: a chocolate cake and a big balloon. He enjoyed them and he fell asleep that night thinking about the next surprises.

Next day, very early in the morning, we woke him up and told him that we need to go to the airport. I prepared the suitcase without him knowing so the news of a vacation took him totally by surprise.

The flight took less than an hour and a half, so we arrived in San Diego in the morning. At the airport, I told him that it’s time to see what the second envelope hides. I read him the message and he saw the picture, so his guess was that we are going to the zoo.

He was close but he wasn’t expecting a safari experience. We rented a car and drove directly to the San Diego Zoo Safari. As we arrived, Bogdan received a special birthday badge and this made him very proud.

We spent the day in the Zoo Safari watching the animals and playing around. He enjoyed the safari trip especially because he loved the “train” that took us to see the animals. And he spent a lot of time at the farm section, playing with the goats.

At the end of the day, he was tired and happy!

The next morning we opened the third enveloped and read the message. He saw the picture of the dolphin and he guessed that we will go swim with the dolphins as we did in Mexico this summer.

I told him that we won’t do that but we will certainly see dolphins. He was curious so we got in the car and drove to the next surprise: Sea Wold San Diego.

We spent the whole day there (from opening until it got dark) and we loved it! Bogdan liked the rides and the shows and we did too!

His favorites were the rides and the pet show, especially because at the end he was able to interact with the animals.

We returned to the hotel very tired but before falling asleep he made sure to check if there is still another surprise for the next day. 🙂

And I saved the best for last!

I wanted the surprises to get even more interesting as the days went by because I knew that his expectations would get higher as he discovered them. So I saved the surprise that I thought he would love most for the last day.

When he saw the note in the last envelope he immediately guessed that we will see Legos but he had no idea that a place like Legoland even existed.

Just imagine the joy in his eyes when we entered!

We spent an awesome day enjoying many rides and having a lot of fun! His favorites were the driving school and one of the Ninjago rides (that he took over and over again).

We went there on a Monday to avoid the weekend crowds so we were lucky to be able to take the rides many times.

When we got out and went to the car, I told Bogdan that this was the last surprise. I was curious to see his reaction. He looked at me and smiled. Then he told me that he loved all the surprises and that he hopes to come back to these places someday.

He was tired and sleepy but I could see the joy in his eyes. And it meant a lot to me!

Next day, early in the morning, we returned home. But the joy that the trip brought to my son lasted a lot longer! 🙂

He talked about it very often in the weeks after his birthday. And he still mentions it now, from time to time, asking me when will we plan another trip like that.

For me, seeing how happy he was to discover the surprises was so nice! I know that even the coolest new toy wouldn’t have made him so happy.

An experience like this was exactly what I dreamed of for his birthday. And I’m so grateful that we could prepare this for him and that everything turned out so well!

More gift ideas that are perfect for young kids

If you are looking for some inspiration for your child’s birthday, I’ve gathered here a list of our favorite ideas: Experience gifts – The best way to offer meaningful gifts that will make kids happy.

I hope that you’ll like them and that they will inspire you to prepare an awesome gift that will make your child very happy! 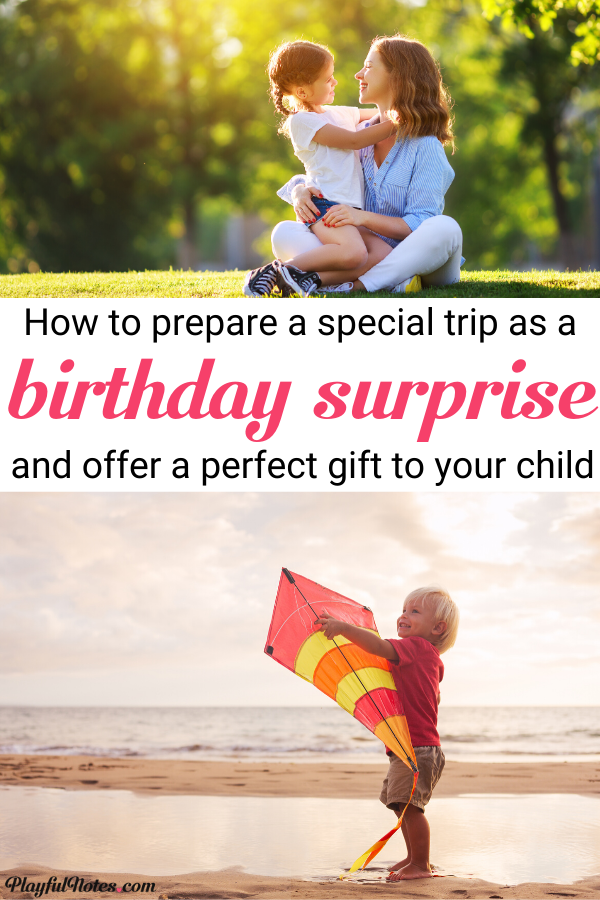 Set limits with calm and empathy

Download the strategy that will help you set limits with calm and empathy, and encourage kids to follow your guidance without threats or punishments!

You'll also join the Playful Notes community and get the resources and inspiration you need to parent with calm, joy and connection even in the most chaotic seasons of motherhood.

We hate spam and promise to keep your address safe.